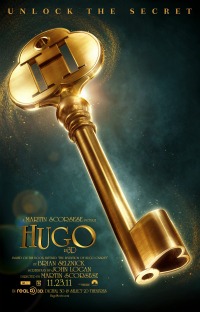 Do you want to have an adventure?

Hugo Cabret is in the midst of one — and Martin Scorsese brings the story to life in his upcoming film Hugo.

Based on the Caldecott Medal-winning novel The Invention of Hugo Cabret by Brian Selznick, Hugo is a beautifully shot piece of historical fiction telling the story of real life turn of the century (last century, not this one) filmmaker Georges Melies through the eyes of a young boy who chances upon one of his automata.

Scorsese, best known for gangster movies like Goodfellas, screened an unfinished version of the 3D movie at the New York Film Festival.

“This is a work in progress,” he told the audience. “I hope that those of you who really do like it come and see the final film.”

Click here for the original trailer for Hugo on SheKnows >>>

The family film focuses heavily on the theme of childhood wonder, with special messages about friendship and independence thrown in for good measure. Film buffs will especially love the nods to the classic film era: Harold Lloyd dangling from the hands of a huge clock and the Man in the Moon with a space capsule in his eye. In fact, the film reads like Scorsese’s love letter to classic film.

Those lucky enough to be in the audience loved Hugo, with many writing their favorable impressions on Twitter almost immediately.

“Not a kid’s movie, but a movie to help kids fall in love with cinema. Spectacular 3D,” wrote @misterpatches,

“Hugo is outstanding. 1st film where 3D is a vital organ of the overall narrative. Brilliant and at its heart, profound,” said @davidc78.

Watch the behind the scenes preview and new trailer for Hugo:

Hugo opens in theaters on Nov. 23. Will you bring your family to see it?