Nucky and the gang are set to come back for Season 3 of HBO’s Boardwalk Empire.

Get set for another round of booze, bosoms and bullets as HBO has renewed the hit Boardwalk Empire for a third season, the cable channel announced Wednesday. 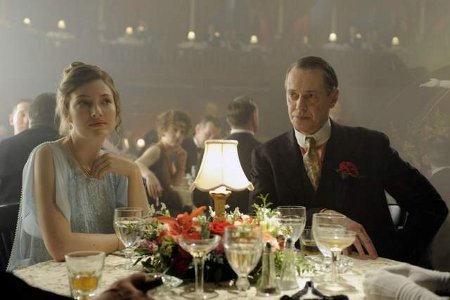 The acclaimed period drama — which focuses on Prohibition-era Atlantic City — has so far racked up eight Emmy awards as it tells the story of corrupt politician Nucky Thompson (Steve Buscemi) and the various mobsters and manipulators who surround him.

“It’s amazing how enjoyably uncomfortable it can be to watch sometimes, brilliant…,” posted a fan on Boardwalk Empire’s Facebook page on Wednesday upon the news of the third season.

The series was created by Terence Winter, known for his work on HBO’s other series about New Jersey mobsters, The Sopranos. This season, Nucky’s boardwalk empire is under attack from all sides as he tries to consolidate power in a world that’s rapidly changing.

Vince Giordano, a New York musician who plays the band leader on the show, feels it’s Boardwalk Empire’s attention to detail that sets it apart.

“It’s as close to me getting into a time machine as I’m ever going to get,” said Giordano prior to this season’s debut episode. “I’ve been involved in this era all my life, for over 50 years, from playing it to promoting it with the hope that someday, it would all come together, and it has with this series. The attention to detail is amazing with the set, the costumes and the music.”

So far, HBO has renewed True Blood, Game of Thrones, and Treme, and upcoming new shows include Luck, Veep, Girls, Life’s Too Short and a cable news drama from Aaron Sorkin.