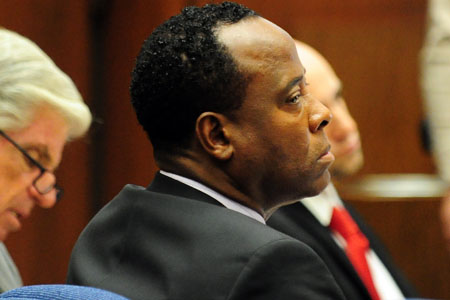 However, many witnesses — including medical examiner Dr. Christopher Rogers — testified that there’s no way the King of Pop could have killed himself. The opposing information led the defense team to drop the defense strategy.

“Giving propofol in [an] unmonitored setting without personnel, without appropriate monitoring, without appropriate equipment, not being prepared, not appropriately reacting to a [cardiac] arrest, not calling 911 in a timely fashion, all directly impacted his life,” California Medical Board cardiologist Alon Steinberg testified Wednesday. “If these deviations were not to happen, Mr. Jackson would have been alive.”

Steinberg also said that Murray acted unethically by not having life-saving equipment in Jackson’s home.

No word on how Murray and his team will try to explain Jackson’s death now. The trial — now 10 days old — will determine whether or not MJ’s former doctor was responsible for his death.

However, the medical examiner’s testimony may have actually helped the defense, according to Jean Casarez, correspondent for truTV’s In Session.

“The defense on the cross-examination really brought out (that) the L.A. coroner didn’t test the stomach contents,” Casarez said. “They looked at it, they saw it, they didn’t test it, so the defense tested it. What did they find? They found Lorazepam in the stomach — four times the concentration of the stomach as in the other areas of the body.”

“And so that denotes that someone orally took at least five to six Lorazepam tablets, maybe more, because some was in (Jackson’s) blood. So the defense is saying, ‘Wait a minute — propofol didn’t cause the death, Lorazepam did.’ And Michael Jackson took the Lorazepam, but you couldn’t put that as the cause of death, because you didn’t test the stomach contents.”