Rihanna has never been one to mince words, so it was no shocker when she dished the dirt to Radar Online about The X Factor judges Simon Cowell and L.A. Reid, calling them, “raw” and “a pain in the [expletive].” 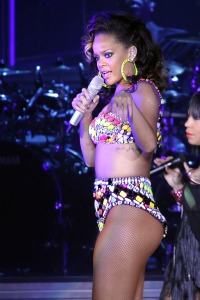 Tonight, superstar singer Rihanna will appear on The X Factor. She already has an in with the judges, she was discovered by panelist L.A. Reid and signed to his label six years ago. But, she can also dish the dirt with the best of them, and Rihanna doesn’t mince words when it comes to how she really feels about two of the most powerful men in the music business.

She stated that if she was an unsigned artist today, she would more than likely try her hand out with the other contestants for her shot at stardom on the television reality show.

Said Rihanna, “Six years ago, before I was signed, if it was The X Factor that had come first, I definitely would have entered to have a chance at fulfilling my dream. With this show, it’s all so exciting and it’s like a party!”

She also stated that she kind of likes the competitive nature of L.A. and co-judge Simon Cowell. She said, “I don’t know who’s more competitive between L.A. and Simon. They are both very stubborn individuals. But they are also very secure in their tastes. What they hate, they hate and what they like, they really love. So I can see them being equally competitive in that area. Simon is very raw. Let’s put it that way. But it’s very honest. You have to listen to everything he says, no matter how nasty it might sound. L.A. Reid, he can definitely be a pain in the [expletive] as well. I have to say, he will find a way to make you feel you might have a second chance on a nice day. But he rarely gives second chances, you really have to impress him in a short time.”