Milla Jovovich tweeted about visiting her zombie friends in the hospital after an accident on the Toronto set of Resident Evil 5. 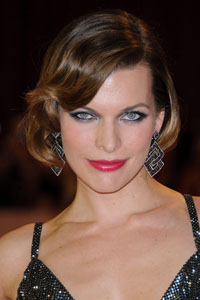 Filming of Resident Evil 5 was halted Tuesday when an on-set accident injured several extras. Emergency crews were initially unable to assess the injuries because the actors were dressed as zombies.

“I could see the look on the first paramedic, saying ‘Oh my God,'” said Toronto emergency medical services Commander David Ralph. One of the 16 injured is still in the hospital.

“I jst [sic] saw akiko (who goes by April btw) and she’s in a lot of pain. She injured her back. Thank god she’s moving her hands and feet and not in critical condition,” Resident Evil 5 actress Milla Jovovich tweeted Tuesday night.

“She’s a piano player. Her brother plays the violin. I promised her that I would come and see her every week while I’m here to give her support and strength in her recovery. I can’t believe she said she wants to come back and finish her part, she’s incredible. I will keep u all posted in how she’s doing over these next weeks.”

The mother of Ever Gabo, 3, tweeted again this morning before heading to set.

“G’mornin every1! Well, ‘camp evil’ is slowly waking up after such a tough day yesterday. I jst [sic] finished make up n the sun is up, ppl r bustling abt, preparing 2 start the day. I’m glad 2 hear that April’s (the girl who got injured yesterday) brother Christian is here w us this morning as a zombie extra! I’m gonna ask him how her night went and hopefully if he’s here, she’s doing better! ” she tweeted.

“…Thanks again for all your kind messages for our sweet, amazing zombie extras! We couldn’t make these films w out their hard work and enthusiasm and we’re so lucky so many ppl love to come and be a part of the RE SERIES!”

Here’s hoping everyone is back in fighting shape soon!