It was another first in the long career of actress Betty White. At the age of 89, she has appeared in her first rap video with singer Luciana for the catchy club tune, I’m Still Hot. 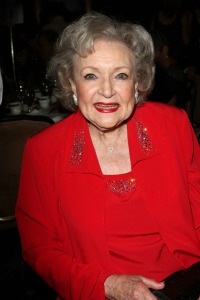 Legendary comedienne Betty White has recorded her very first rap song and video, and some of the proceeds from it will go towards the Los Angeles Zoo. Betty is a longtime animal rights activist and serves on the zoo’s board of directors, so it is only natural that she donate proceeds to benefit her beloved animals.

Luciana is a well known singer from England, and her club version of I’m Still Hot has taken off here in the states. But add everyone’s favorite Golden Girl into the mix and you have a duo that can’t be beat!

Said White about the experience to FOX, “Music videos are not necessarily close to my heart, but animals always are. I’m always comfortable with them. My beloved husband, Allen Ludden, when we would have a photo shoot, he would always put a dog in my lap. They would have to shoot me from the neck up, but I’d always be so relaxed.”

In the song, Betty raps along with Luciana, adding a sweet touch to a genre that can sometimes be a bit harsh.

White appears with several shirtless young men in the video, but she never flinches. White spoke of the shoot saying, “It’s a switch for me, I will tell you. But it’s fun and they gave me these nice young men to work with that are built like little brick houses. It’s challenging but the boys were so dear with me.”

The song is available on iTunes.