It was a two-hour episode of Gene Simmons Family Jewels as Shannon tries to get the family to embrace a healthier lifestyle after Gene’s sudden hospital stay. And when Shannon hires sister Tracy as a wedding planner, all hell breaks loose! 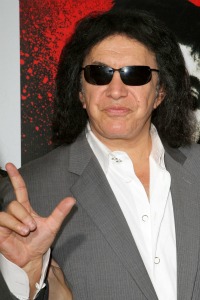 The drama of episode one of Gene Simmons Family Jewels began with Gene being rushed to the hospital after a nasty fall. Apparently, due to his lack of sleep, workaholic ways and poor diet, Gene hadn’t been feeling well and passed out suddenly, hitting his head on the floor. He was later released from the hospital.

Later, during their interview segment, Shannon told Gene, “If you ruin my wedding by dying, I’ll kill you.”

Shannon, worried about Gene’s health and her own (after a breast cancer scare last season), decided to get rid of all the chemicals in the house, including cleansers and body products. She then took to the refrigerator, removing everything that wasn’t healthy.

She and Gene took a trip to the local supermarket, where they started to read labels in order to make the change toward living healthier. Gene said, “People years ago ate organic and only lived to their forties.” Shannon ignored him.

All of Shannon’s lifestyle changes really began to hit home for Gene after talking to longtime friend Nick, who had recently lost his wife Donna to cancer. Nick told Gene that he was lost without Donna and that he and Shannon should take care of each other. Nick also reminded Gene to live every moment because you never know how long you have.

Gene, now fearing death, took Shannon to a cemetery. He felt his family should be taken care of in this life and in the hereafter. They then went to a lawyer to take care of some legal matters, in case of his or Shannon’s passing. But then something odd happened. The lawyer said he apologized for the smell in the room and removed the garbage can. But it wasn’t trash the lawyer was smelling. As it turned out, all the organic body products the couple had switched to, including deodorant, were just not working for Gene and Shannon! Needless to say, they are still trying to eat healthier but have returned to using their chemical-laden body products once again.

Episode two was more low-key and less drama – as it was all about the wedding, and how to prepare when you have no time and no clue. Shannon was so overwhelmed that she revealed to her sister Tracy how hard it was all to manage. Tracy offered to be Shannon’s wedding planner. Shannon agreed, until Tracy’s over-the-top suggestions were a bit too much for her to take, and she hired a real wedding planner on the sly. Her plan worked for a while, until Tracy found out!