Julianne Hough hit the Dancing with the Stars floor twice on Tuesday to promote her new movie Footloose. 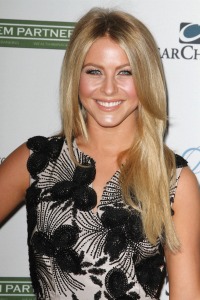 Footloose opens Friday (Oct. 14), but Julianne Hough got the party started early with a dance-tastic tribute on Tuesday’s (Oct. 11) Dancing with the Stars.

It’s been two and a half years since Julianne Hough graced the Dancing with the Stars dance floor and she looked like she had never left during her performance on Tuesday’s show.

With her movie Footloose opening this week, she took to the floor to celebrate the movie’s title with a routine she shared with co-star Kenny Wormald.

The performance began with a beautiful number to Holding Out For A Hero and then morphed into a rocking good time of Footloose backed by the vocal stylings of Blake Shelton and we have to say, if we weren’t excited for the debut of the movie before, we are now.

Kristin Cavallari leaves the DWTS ballroom — why so soon?

Julianne Hough wasn’t going to show up to her old stomping grounds and not do a routine with her brother, pro Derek Hough.

Julianne returned later in the show and shook her tail feather with bro Derek, doing their version of the jive.

These two are the most exciting dancers. It’s hard to believe they haven’t danced together on the DWTS stage since season 8.

What did you think of Julianne Hough’s return to Dancing with the Stars? Does it make you miss her more?

Head over to our comments section to talk about Footloose and tell us if you’ll be catching it on Friday.