Rosie O’Donnell is talking marriage with her new girlfriend. 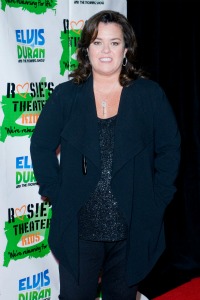 When Rosie O’Donnell announced her split from her partner Kelli Carpenter in 2009, she never thought she’d find love again. Happily Rosie has — and now she is celebrating that love along with her new talk show. Rosie is back, baby!

The talk show host and comedian chatted with Howard Stern on his Sirius XM radio show, and of course all the shock jock wanted to talk about was O’Donnell’s love life.

Rosie and her new lady love Michelle Rounds met at a Starbucks this summer and have moved their relationship along quickly — perhaps too quickly, Stern suggested.

“We’re getting wedding invitations printed,” she joked. “You’re getting invited.”

That joke might not be too far off the mark, though. When Stern asked if the couple planned to walk down the aisle, Rosie said, “I think it could be in the cards. It’s legal in New York.”

Has she already proposed? “I think we’ve discussed it,” she answered cagily.

One perfect union Rosie is already celebrating is that of her new show and OWN. The Rosie Show debuted Monday night with hilarious guest Russell Brand and during filming Rosie announced that yes, she will marry again.

Rosie wed Kelli in California in 2004 in a marriage that was only recognized by that state. They have four children together: Parker, Chelsea, Blake and Vivienne. They separated in 2007, but did not announce it until two years later.

Read on for more Rosie O’Donnell

What to expect from Rosie O’Donnell’s The Rosie Show