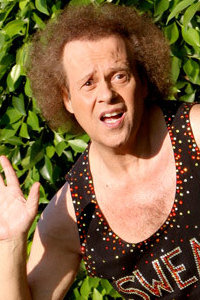 Fitness guru Richard Simmons all but saved the day for Chaz Bono on Dancing with the Stars Monday night, helping Bono with his Rocky-themed dance. But some viewers were left asking if Simmons didn’t look a little too thin.

Some feel that Simmons didn’t have his usual cheeky glow, but he’s more than fine, said rep Tom Estey to SheKnows.com

“He is in the best shape of his life!” Estey said via email. “He is actually at the same weight he was when we launched Sweatin’ to the Oldies some 20 plus years ago. He continues to travel some 300 plus days a year and teaches three days a week at his exercise studio, Slimmons, in Beverly Hills. He is also hard at work on his Fit Kids Bill, a new TV show and book.”

Simmons, 63, has been a national figure speaking out against a sedentary lifestyle for more than 30 years.

As for DWTS, Bono and partner Lacey Schwimmer performed a Rocky-themed paso doble while his mom, Cher, watched from the audience.

The performance has invigorated Bono’s chances.

“In the true spirit of Rocky, no matter how many knocks you take, you keep coming back, you keep fighting and you keep getting stronger,” said judge Bruno Tonioli on the broadcast.