MTV legend Johnny Knoxville is a proud papa. The actor and amateur stuntman recently announced the birth of his third child — a daughter, named Arlo. 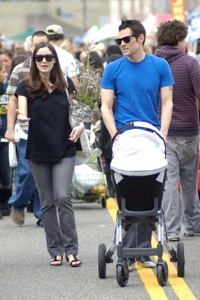 Johnny Knoxville is a daddy again. The Jackass star and his wife Naomi Nelson welcomed a new addition to their family in the form of baby Arlo. Arlo is the second daughter for Knoxville and the first for Nelson.

Arlo was born on Oct. 6 and Knoxville made sure to keep his fans in the loop following her delivery. Shortly after the birth, Knoxville wrote on Twitter, “Naomi, Madison, Rocko & I welcomed a brand new baby girl into our family.” He continued, “Her name is Arlo & mommy & baby r doing great!!”

This is the third child for Knoxville who has a 16-year-old daughter, Madison, with ex-wife Melanie Lynn Clapp and a two-year-old son, Rocko, with Nelson.

Johnny Knoxville rose to prominence during the early 2000s with the MTV prank-based show, Jackass. It featured him and a group of skateboarders and stuntmen including Bam Margera, Chris Pontius, Wee Man and the late Ryan Dunn. The show’s popularity was a favorite with teenagers and young adults, and featured guest appearances from Hollywood stars such as Brad Pitt and Sean Penn.

Aside from the Jackass television and film series, Knoxville has appeared in other movies including The Dukes of Hazzard, A Dirty Shame and Men in Black II. Knoxville is currently filming the Josh Schwartz comedy Fun Size opposite Chelsea Handler.

Congratulations to Knoxville and Nelson on their new bundle of joy.