Emma Watson is probably glad she’s not dating actor Frances Boulle anymore after his thoughtless comments about their relationship. 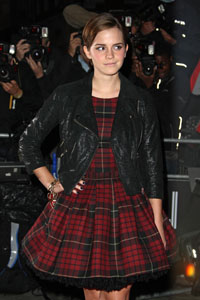 Harry Potter star Emma Watson is at the top of everyone’s hot list right now — she’s in-demand as an actress and model, and we’re pretty sure every twenty-something guy out there wants to date her. Well, every guy except her ex-boyfriend.

“We had a bit of a thing a while back, but I have always been an ambitious person and I want to achieve my own notoriety for what I’ve done,” Made in Chelsea actor Francis Boulle told Heat magazine in their new issue. “That’s why I chose not to pursue it any longer, because I didn’t want to be the boyfriend of some child actress.”

Watson’s hardly “just a child actress.” Perhaps Boulle just came down with a case of the Foot-in-Mouth Disease going around Hollywood these days. However, he does have kind words for his one-time gal pal.

“We do share a lot of mutual friends and our paths cross from time to time. I actually really like Emma. She’s a really cool person,” he said. “She’s a very different person to who she is in the media. That’s what I liked about her — she’s very interesting.”

Watson is now dating actor Johnny Simmons – they met on the set of their new film The Perks Of Being A Wallflower — and she reportedly asked him to move in with her while she studies at Oxford University this year.

Still, Watson isn’t immune to the self-doubt that plague many girls her age.

“My friends are always telling me I have to play hard to get because I’ll pretty much say to a guy, ‘I like you — let’s go hang out.’ But my friends are like, ‘You can’t do that! You have to string this guy along.’ And I’m just like, ‘No! I won’t! I just want to go on the date! It’s a nightmare — I definitely haven’t figured it out yet,” she told Seventeen this summer.

“I say to my friends, ‘Why hasn’t X called me?’ They’re like, ‘Probably because they are intimidated.’ It must be the fame wall.”

“I find it hard to believe anyone would find me intimidating.”