Michael Jackson’s coroner told jurors in the Conrad Murray manslaughter trial that there was little reason to believe the singer killed himself with propofol. 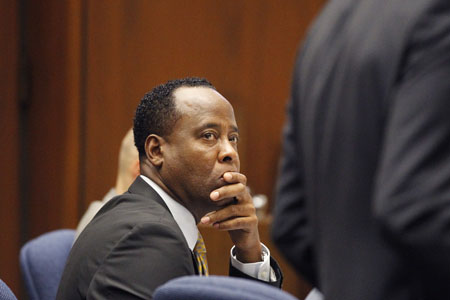 “You’d have to assume that Mr. Jackson woke up, although he was at least to some extent under the influence of propofol and other sedatives, he was able to somehow administer propofol to himself,” Rogers testified in court.

Instead, he thinks Murray tried to estimate the dosage for Jackson, leading him to inject the singer with the fatal dose.

“We did not find any type of precision dosing device, which means the doctor would be estimating how much propofol he was giving,” the coroner said. “I think it would be easy in those circumstances for the doctor to estimate wrong and give too much propofol.”

Rogers’ testimony directly contradicts the Murray defense team’s explanation of the events that happened on June 25, 2009. However, other witnesses — including emergency room doctors and Jackson’s bodyguard — testified that Murray tried to hide the vials of propofol and ordered doctors to continue CPR on the singer, even though he was dead on arrival.

Fans were not pleased with the photo.

“None of the fans want to see this photo autopsy! I want to see my King dancing, singing, and enchanting,” one tweeted, echoing the thoughts of thousands of other fans.