Are Demi Moore and Ashton Kutcher heading for Splitsville? Maybe, if Moore’s silence on Twitter is any indication. 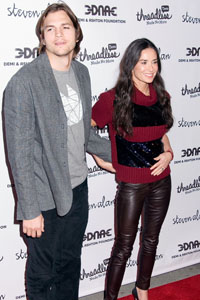 It looks like Two and a Half Men star Ashton Kutcher is working hard to get back in the good graces of his wife Demi Moore after word emerged that he cheated with a young blonde in San Diego.

At first, it looked like Kutcher and Moore were heading for divorce court; then, the superstar pair were spotted at a Kabbalah Center in Los Angeles and later at a campground in California’s Cachuma Lake with Rabbi Yehuda Berg, Kutcher’s brother Michael Kutcher and a florist friend.

Now? Kutcher is busy promoting and complimenting his wife on her new film with Jennifer Anison and Alicia Keys, Five.

“Big night for TV #twoandahalfmen Bears vs Lions and @mrskutcher’s 5. My tivo might explode,” Kutcher tweeted Monday afternoon. He followed it with another tweet directly to his wife.

“@mrskutcher good luck tonight! you should be proud.”

Moore’s response to her husband? Nada. Peculiar, especially since she thanked dozens of fans and well-wishers after Kutcher tweeted.

Is Kutcher trying to suck up? Sources are claiming Moore went to a divorce lawyer before the couple went on their camping excursion. Star magazine claimed that Moore showed signs of distress while on the weekend.

“Please don’t take photos of me or my family,” Moore begged a camera-happy camper. “Please don’t expose this.”

“It was obvious that Demi was showing the strain about the state of her marriage,” the camper reportedly said after selling the photos to the gossip mag.

Do you think a divorce between Demi Moore and Ashton Kutcher is imminent?