Harry Belafonte isn’t singing the praises of Herman Cain. In fact, he has some serious problems with the presidential candidate.

Iconic singer Harry Belafonte has some harsh words for GOP presidential candidate Herman Cain. Belafonte was on Joy Behar’s CNN Headline News show when she asked for his thoughts on Cain’s recent comments on racism in the United States. 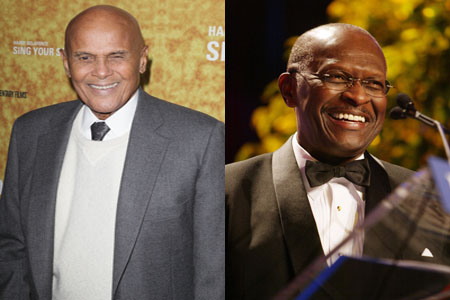 “I don’t believe racism in this country today holds anybody back in a big way,” Cain, the former Godfather’s CEO, told CNN in a recent interview. “Are there some elements of racism? Yes, it gets back to if we don’t grow this economy, that is a ripple effect for every economic level, and because blacks are more disproportionately unemployed, they get hit the worst when economic policies don’t work. That’s where it starts.”

Belafonte thought Cain’s comments were foolish — and he wasn’t afraid to say it.

Belafonte wasn’t done on his criticisms about the candidate and the Republican party in general.

“The Republican party, the Tea Party, all of those forces to the extreme right have consistently tried to come up with representation for what they call black, what they call the real Negroes and try to push these images as the kinds of voices that America should be [looking] to,” Belafonte said.

“So we’ve got Condoleezza Rice, we’ve got Colin Powell, they are heroes for some people but for a lot of us they are not. And Herman Cain is just the latest incarnation of what is totally false to the needs of our community and the needs of our nation. I think he’s a bad apple and people should look at his whole card, he’s not what he says he is.”

As for Cain? He’s not afraid to call it like he sees it — he recently criticized President Obama for his “blackness.”

“[Obama’s] never been a part of the black experience in America,” Cain said.

Who do you think is right: Harry Belafonte or Herman Cain?

39 mins ago
by Caroline Greelish