Milla Jovovich recently revealed that she wouldn’t mind if her daughter wants to take on the family business. However, Jovovich will demand little Ever Gabo put in some work first.

Many celebrity parents claim they won’t let their children into the entertainment business, but not Milla Jovovich. The Resident Evil 5 stunner recently told the Ireland Independent that she wouldn’t mind if three-year-old daughter Ever Gabo wanted to go into acting or modeling. 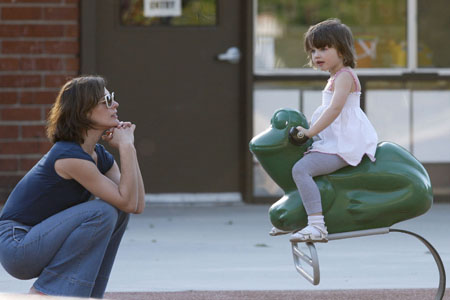 “That’s fine,” she said of little Ever going into modeling.. “She just needs to put the work in and be educated about it. I want to be able to drill her about who the best 20 photographers in the industry are. I want to know that she has a great education about art and about framing. If she wants to be an actress, I want to see that she wants to go to acting classes and take drama in school.

It’s a wise choice: Jovovich was a stunning child model and it’s likely her daughter is a mini-version of her. Plus, Jovovich said her daughter’s childhood is going to be a lot different than her life as a poor Ukrainian immigrant trying to make her way in the United States.

“For me it was different. My mother really wanted me to learn what she knew because we were immigrants and we were really trying to fight to survive,” the actress said. “But for my daughter, life is very privileged so if she wants to do something before she finishes high school she better work for it to prove to me that she has the follow-through to finish it.”

The Three Musketeers actress said she also plans to take a back seat to her daughter and director husband, Paul WS Anderson. Does she want to stop acting? No, but she needs a break.

“I only have one child. But you know for my future children I really [want to] take a bit of a back seat to my husband’s career and support him. I’ve been working since I was 11 and I’m still relevant at almost 36 so I figure I’ve had an amazing career and I can’t really ask for anything more,” she said.