Michael Douglas is back on track. The veteran actor is set to star in an HBO film based on the life of musician and stage legend, Liberace. 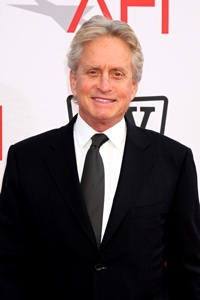 After a tumultuous year, Michael Douglas is on the mend. The Academy Award-winning actor will headline a biopic based on the life of flamboyant pianist Liberace. The film has been in development for over two years, but suffered a delay due to Douglas’ recent health issues. The actor was diagnosed with throat cancer in 2010 and took an extended break for treatment.

The Liberace biopic was initially developed for a theatrical release, but producer Jerry Weintraub has decided that HBO is a better fit. The film is officially called Behind the Candelabra and it will center on the relationship between Liberace and his live-in lover Scott Thorson, slated to be played by Matt Damon.

Liberace (born Wladziu Valentino Liberace) was a fun-loving and vibrant performer. His bedazzled costumes and his over-the-top persona became just as famous as his music. Weintraub acknowledges that making this film “is a tough one” because “you’re doing a picture about a gay couple – in a time when gays did not come out of the closet.”

The performer’s sexuality is just a small part of the overall story. Liberace was a talented man with a charismatic personality and countless fans. Weintraub told The Wrap that he wants to reveal every facet of his life. “It’s a fun movie because Liberace is a fun guy — I knew him very, very well,” said Weintraub. “But there’s a dark side as well. It’s very dark and it’s very light.”

Behind the Candelabra begins production next summer and will shoot in Las Vegas, Los Angeles and Palm Springs.