Dr. Conrad Murray says that another doctor, Dr. Klein, fueled Michael Jackson’s addiction to powerful prescription painkillers, which resulted in his insomnia and use of sedatives to sleep. Murray is currently on trial for involuntary manslaughter in the death of Jackson and, if convicted, faces four years in jail. 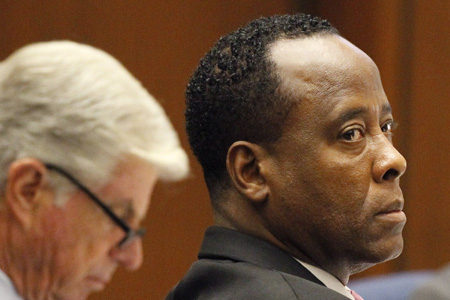 Murray will not testify at the trial, but an interview with police – played in court yesterday – gave some insight as to what the doctor believed to be the cause of the death of Jackson. He said that Jackson told him he wasn’t seeing any other doctors, but Murray heard he was also seeing Dr. Klein – the doctor who gave him the powerful painkiller Demerol.

“I was not aware of any other medications that he was taking, but I heard that he was seeing a Dr. Klein three times a week in [a] Beverly Hills clinic in the weeks before his death,” he said in the interview. “His production team had said to me that his worst days on the set is [sic] when he had gone to Dr. Klein’s office, which is about three times a week and when he came back, he was basically wasted and required at least 24 hours for recovery.”

Murray said that Jackson’s use of Demerol caused him to have difficulty sleeping. This led to Jackson demanding high-power sedatives to help him sleep, including Propofol, which Jackson called his “milk.”

Jackson had several sedatives in his system when he died, including Valium, Lorazepam and Midazolam. When he still couldn’t sleep, Murray said Jackson insisted on Propofol. Murray gave him a dose then claims he briefly left the room, only to return to find Jackson unconscious and near death.