Taylor Swift’s domination of the music industry continues with her new title – Billboard’s Woman of the Year. The Grammy winner and multi-platinum artist beat out tough competition to become 2011’s top dog. 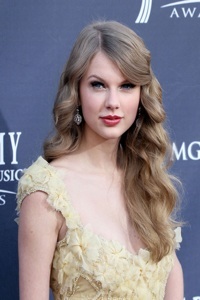 Taylor Swift has received a prestigious honor from Billboard. The pop-country singer has been named their 2011 Woman of the Year. This news comes on the heels of Swift’s latest album Speak Now, which is certified five-times platinum. The 21-year-old is the youngest artist to ever receive the title.

According to Billboard, Swift began her professional career in 2006 with her self-titled debut album, which holds the record for the longest-running album on Billboard 200 since 2000. Her sophomore effort Fearless also made waves when it became the longest-running No. 1 album by a female country artist on the Billboard 200 chart’s history. Fearless went on to sell six million copies and is considered the most awarded country music album of all time.

Swift’s third album Speak Now debuted at the top of the Billboard charts last October and Swift has spent the majority of 2011 on her Speak Now World Tour. She’s received worldwide support from fans, celebrities and fellow musicians including hip-hop artist T.I.

Billboard’s Editorial director Bill Werde says, “At the young age of 21, Taylor has already made a major impact on music and has been an incredible role model for aspiring singers/songwriters and young women everywhere. I look forward to watching her career continue to flourish in the years to come.”

Swift will officially receive the Woman of the Year honor at the 2011 Billboard Women in Music event on Dec. 2. The event takes place in New York City and will feature a who’s who of music’s elite.

Congrats to Taylor Swift on this amazing achievement!