Hilary Swank is under fire for partying with a controversial political leader. 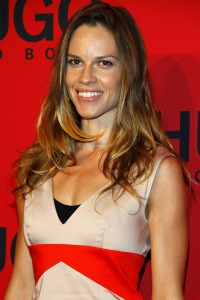 Remember the heat Beyonce and Mariah Carey took for performing at a party for Gaddafi’s family last year? Hilary Swank is about to undergo the same scrutiny after the star partied with Chechen President Ramzan Kadyrov — even after being warned that he has been accused of arranging disappearances, torture and executions to stay in power.

The Human Rights Foundation called out Hilary Swank for her decision to attend the festivities – an act they claim she made even worse by reportedly promising not to go after her people were warned that it was a bad idea.

Despite her promise, Swank is clearly visible in a video of the event – along with action star Jean-Claude Van Damme. Shakira was reportedly scheduled to attend but didn’t show.

“Hilary Swank obviously has the right to earn a living entertaining the highest bidder, but this sort of venality should be exposed – especially after claiming she was not going,” said Human Rights Foundation president Thor Halvorssen in a statement. “Would she have accepted an invitation to entertain Pinochet? Al-Qaeda? The apartheid government in Pretoria? We must remember the disgrace Mariah Carey, Nelly Furtado, Beyonce and 50 Cent were exposed to after singing for Gaddafi’s family and earning millions of dollars for it.”

In the video, Swank can be seen saying she is proud to be in the Chechnyan capital of Grozny and wishes the controversial leader a happy birthday.

“Really, truly, for me this was a great honor to learn more about you and your country and what you’re building,” Swank said onstage in the video. “Happy birthday, Mr. President.”

“By attending this kind of event, it really legitimizes and bolsters the image of someone that’s linked to human rights abuses,” said Jane Buchanan, Human Rights Watch’s senior researcher.

“Our concerns are that if these stars got paid for attending then they should give the money back. It’s really not appropriate.”