Hungarian anti-terrorism officers seized 85 guns that were being stored in a Budapest warehouse near the airport for Brad Pitt’s new zombie movie, World War Z. The guns were not prop guns, but fully-functional, military-style automatic assault rifles. 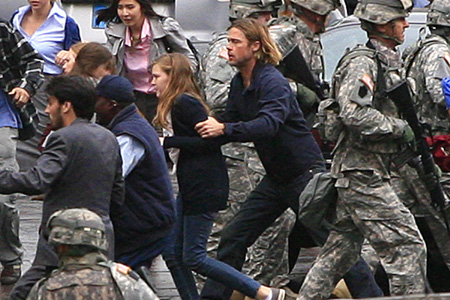 “This morning a private plane brought guns wrapped in a parcel from a company to an individual [in Budapest],” reported the director and deputy director of Hungary’s anti-terrorism unit, Hajdu Janos and Zsolt Bodnar. “Guns like these are highly illegal to transport even if they were to used as stage guns, which hopefully they weren’t.”

Pitt’s production company, Plan B Entertainment, is producing the zombie thriller. So why did he have fully functional weapons for use on-set? “The movie company’s employees must have made a mistake bringing the guns in without the Anti-Terrorism Unit’s permission,” an unnamed source reported. The paperwork that came with the guns said they were non-functional, when they were actually fully functional.

Pitt, pictured here on the set of his movie,  is upset by the delay this weapons snafu has had on World War Z, which is slated for a December 2012 release. “The film is already over budget and over schedule,” a source reports. “Brad is furious.”

“We are interrogating witnesses now, getting closer to solving the firearms story,” said Janos. We have a feeling heads will be rolling at Pitt’s Plan B Entertainment once they find out who is responsible for the mistaken paperwork.