Lauren Alaina says she chooses her songs carefully so that she can be a good influence on young girls. 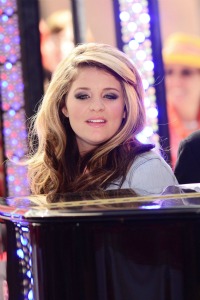 American Idol runner-up Lauren Alaina is releasing her first album Wildflower today, and the teen singing sensation says she carefully chose her songs to be a positive influence on girls.

“I couldn’t sing songs that are inappropriate for young girls to hear,” Alaina told The Hollywood Reporter. “The words that are around us aren’t always great, especially in high school, and I tried to pick songs that would be inspirational to young girls, and help them realize they are who they are, and that’s what we struggle with.”

“Young girls don’t know how special they are. I struggled with it so much on the show, because I watched myself on national television and I picked myself apart. It’s only natural.”

But Alaina says being on American Idol helped her mature enough to see that the only person she should ever change for is herself.

“It helped me grow up and realize that I am who I am and if I don’t like something about myself, I have to change it for me,” she said.

As far as her leap to stardom goes, Alaina is taking it day by day and savoring every moment.

“My favorite song [on the album] right now is The Middle, which is really beautiful and talks about how you have to live each day to the fullest,” she said. “I have to remember that sometimes because my life is flying by me right now, and all these amazing things are unfolding.”

Read on for more Lauren Alaina

Lauren Alaina breaks the top ten with her first release

American Idol‘s Lauren Alaina was rejected by who?