Did you know Hilary Duff is a best-selling author? The actress, singer and mom-to-be recently stopped by Good Morning America to promote her new book, Devoted. Watch! 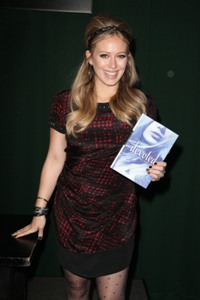 Hilary Duff is a stellar multi-tasker. Simultaneously in the works for the woman once known as little Lizzie McGuire is the launch of her second novel and a baby!

At just 24 years of age Hilary Duff is already a married woman, best-selling author and expecting her first child. The young entrepreneur stopped by Good Morning America on Monday to promote her second novel, Devoted.

The book is the sequel to Hilary Duff’s first work, the paranormal thriller Elixir. The follow-up novel picks up where the last one left off, and Hilary confesses that while she doesn’t intentionally write about herself, there are quite a few similarities between she and main character Clea.

“Things just seem to filter in, you write what you know,” Duff, pictured here on Oct. 10 explained. “We both have a lot in common; we’ve both traveled a lot. We both are constantly, you know, wanting to prove ourselves. She’s just a young girl trying to figure out where she fits in life and I have felt that many times and am still going thought that.”

Hilary Duff, currently about four months along, announced her pregnancy on August 14, 2011, the one year anniversary of her marriage to hockey player Mike Comrie. When asked about pregnancy cravings she shared with GMA, “When I get something on my mind I want, I want it now, I’m ferocious. I’m always up for red hots, which is so weird because I’ve never liked them before. Thank god it isn’t fried and covered in butter.”

Will you being picking up Hilary Duff’s latest book, Devoted?