It’s the interview everyone’s been waiting for ever since the belly rub seen around the world at the 2011 MTV Video Music Awards. Beyonce opens up to Harper’s Bazaar about her pregnancy, life with husband Jay-Z and her hopes for the future.

Beyonce has conquered the worlds of music, movies, fashion and fragrance. Now, she is attempting the ultimate role of her life, motherhood, and it is one she’ has dreamed of since she was a young girl. 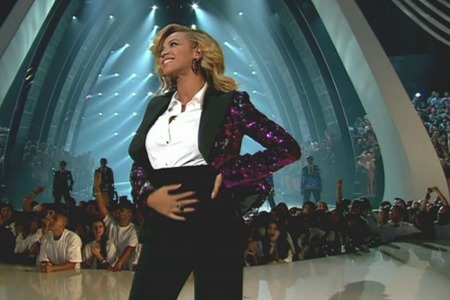 It was the surprise of the year as Beyonce opened her jacket at the end of her energetic dance number at the 2011 MTV Video Music Awards and rubbed her belly. Never before did one movement make so much of a statement without saying anything at all. It caused the Twitter universe to go crazy, with tweets being sent at a rate of 8,868 per second, a new record for the site.

Now that all the hoopla has died down, Beyonce can truly relish the changes that will be happening in her life. She states in an interview with Harper’s Bazaar, “It was important to me that I gave myself time to focus on becoming the woman I want to be, building my empire, my relationship, and my self-worth, before I became a mother. Now God has blessed us with the ultimate.”

She also revealed little known details about her extremely private relationship with husband Jay-Z. “We have been together since I was 20 years old. We took our time and developed an unbreakable friendship before we got married. I admire his ability to inspire others. To me, Jay represents the American dream. Jay’s music has helped define our generation. All that he has overcome and worked to achieve gives millions hope that they can become whatever they want to be. I respect him so much; he is a great man and a great artist.”

She also went on to say, “We focused three years on our marriage and found that it brought us an even stronger bond and connection. But like anything great and successful in your life, marriage takes hard work and sacrifice. It has to be something both you and your husband deeply want. The best thing about marriage is the amount of growth you have because you can no longer hide from your fears and insecurities. There’s someone right there calling you out on your flaws and building you up when you need the support. If you are with the right person, it brings out the best version of you.”