Disney and Marvel have finally released the official trailer for their superhero film, The Avengers. The movie stars Robert Downey Jr., Scarlett Johansson, Chris Evans and a slew of other Hollywood stars.

What do you call a team of six superheroes with amazing power and insurmountable skills? In the Marvel Universe, they’re called The Avengers and we have the first trailer for the ambitious comic-inspired film. 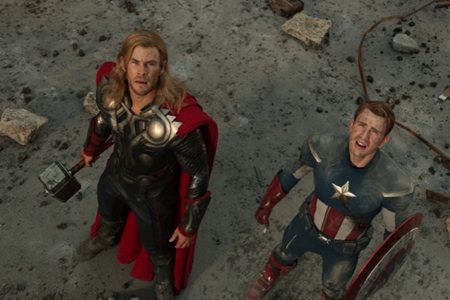 During its production, The Avengers set was the one-stop shop for paparazzi photos and amateur video. Therefore, this trailer is the world’s first official look at what fans can expect in theaters next summer. Marvel began their journey to The Avengers long before this year. The ambitious project began in 2008 with the releases of Iron Man and The Incredible Hulk. The studio decided to group their most successful, individual comic book properties to create one large entity.

A collaboration like The Avengers is unprecedented in Hollywood. Each hero, with the exception of Hawkeye and Black Widow, has a solo movie under his belt. It has been proven that the actors can carry a film on their own, but now they have to share the limelight and present a cohesive unit to the audience. Do you think they’ll succeed?

The Avengers is directed by Joss Whedon and opens in theaters May 4.