In the most jaw-dropping moment of the night, right after Chaz Bono and partner Lacey Schwimmer ‘s powerful Rocky inspired Paso Doble, the camera cut to legendary superstar Cher, tears in her eyes, cheering her child on.

Chaz Bono, only child of legendary entertainers Sonny and Cher, took to the Dancing with the Stars stage once again, and performed a powerful Paso Doble with partner Lacey Schwimmer that reduced everyone in the room, including judge Carrie Ann Inaba, to tears. But there was one person whom everyone was focused on once Chaz Bono’s performance was over, the shock of the evening, Cher, seated in the front row. 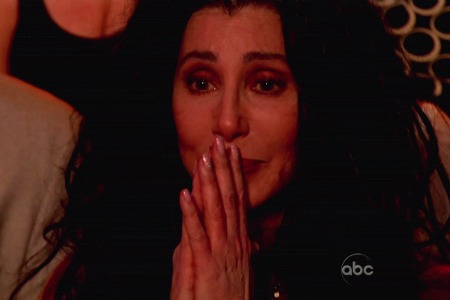 The camera cut to a teary-eyed Cher, applauding her son with all her heart. She even gave him a standing ovation.

Chaz returned to the celebrity holding area and spoke to Brooke Charvet, saying his mother’s presence was “amazing.”

He later told OnTheRedCarpet.com, “She was genuinely proud and it was great. It was so special. I mean my whole family was there and they were all, you know, so excited, so proud, so rooting for me. Last week was a hard week for me and I felt like this week, for us, we came back real strong.”

Judge Bruno Tonioli stated after Chaz Bono’s performance, “In the true spirit of Rocky, no matter how many knocks you take, you keep coming back. You keep fighting and you keep getting stronger. Carrie Ann Inaba was moved to tears and said that Chaz had “magic.” Cranky Len Goodman said it was, “your best dance to date.”

Chaz also tweeted, stating, “Amazing, Amazing Night!…thanks to everyone for the support. I had an awesome time dancing to the Rocky theme with @LaceySchwimmer and my whole family in the audience.”