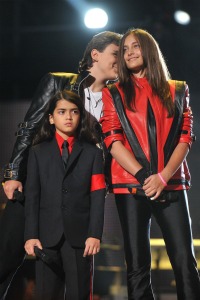 Just days after the Michael Jackson tribute concert wrapped in Wales, the Jackson family says they are planning another — and this time the proceeds will benefit children affected by the Japanese earthquake.

Speaking at a news conference held at London’s Claridge’s hotel, family matriarch Katherine Jackson told the press, “If Michael was alive, he would definitely have done something to help the victims of the earthquake in Japan. Michael loved children, he would have felt for those children who lost parents or homes.”

Jackie, Marlon and Tito Jackson plan on performing at this second show under the heading The Jacksons. It is unclear if Michael’s kids — Paris, Prince and Blanket — will appear on stage again.

“This concert can help children,” Jackie said. “I’m glad I can put smile on their faces again.”

“Music can bring us together,” added Marlon. “Children can’t live without guidance. We want to point out kids to right direction. I’m pleased music can help other people.”

How much is Michael Jackson’s Thriller jacket worth? >>>

Tito Jackson, who actually visited Japan to tour the extensive damage caused by the devastating earthquake, spoke of the power of music to bring people together.

“People can become one, as human race,” he said.

Michael Jackson Tribute Live will take place in Tokyo on December 14 and 15. Merchandising profits will be donated to a charity helping kids who lost their homes and families in the quake. Tickets go on sale October 12.