The ballroom took on the silver screen this week, as Dancing with the Stars paid homage to movie themes. Check out which tributes to the movies turned out to be a hit and which ones flopped.

Last week, Kristin Cavallari left the ballroom. This week, it was time to grab some popcorn and get lost in the dances of the big screen. 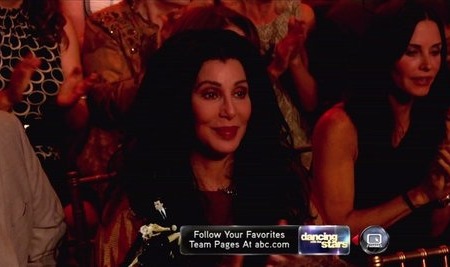 The contestants of Dancing with the Stars danced to the themes of some of the most memorable movies of all time, and once again, Ricki Lake hit the top of the leader board.

Julianne Hough to return to DWTS>>

Chynna and Tony (21/30):  Chynna Phillips and Tony Dovolani tackled the tango. They paired it with the music from Mission Impossible and the tango proved to be an impossible mission for these two.

There was mistake after mistake and Len Goodman wasted no time pointing it out to us. On the bright side, what she did do right, she did beautifully.

David and Kym (23/30): David Arquette and Kym Johnson paid tribute to the theme from Indiana Jones: Raiders of the Lost Ark, by doing a character-filled paso doble.

Bruno Tonioli loved the way David Arquette cracked his whip. Easy now, Bruno. He was confident, strong and in control. Carrie Ann Inaba loved every minute of it. Len Goodman hated it! He claimed there was too much “stomping” of the feet.

Carson and Anna (20/30): Carson Kressley and Anna Trebunkaya paired up the theme from Pirates of the Caribbean : Curse of The Black Pearl with the Viennese Waltz. Odd? Yes. Terrible? Kind of. Do we still love him? Yes!

Carson Kressley grabbed a sword, threw on a pirate hat and gave us a show. Carrie Ann said it was his most “butch” performance ever, while Len likened it to child birth. We won’t go there! He did say he’d still vote for him though.

Nancy and Tristan (21/30): Nancy Grace and Tristan MacManus danced the paso doble and there wasn’t much fire to it. Bruno said she has to become a “ball breaker.”

Carrie Ann tried to come to her defense by using the “age” case. Eh, she’s good, just kind of boring.

Hope and Maks (24/30): Hope Solo didn’t have to be sexy this week, which was a good thing. Hope and Maks Chmerkovskiy took on the Toy Story theme “You Got a Friend in Me.”

Their fox trot was playful and cute. Maks just needs to keep her away from anything sexy for the rest of the season. Innocent is her key and she could go far if he keeps her on the right track.

Rob and Cheryl (24/30): This week, Rob Kardashian and Cheryl Burke took on the theme of Superman and if Cheryl Burke just keeps giving him direction and he keeps taking it, Rob will go all the way.

He was strong and masculine — everything the paso doble needed to be to transform him from Clark Kent to Superman. Carrie Ann likes the way he “moves.” She said he had “spice and flavor.”

Ricki and Derek (29/30):  Ricki Lake and Derek Hough danced the tango to the theme of Psycho. They twisted and turned just like the theme does.

She delivers every week and this week was no different. She lost a bit of technicality every now and then, but she got the drama of the dance perfectly. She got two tens, which were the first tens of the season.

Chaz and Lacey (21/30): Chaz Bono and Lacey Schwimmer have been fighting their way through their dances and it was fitting that this week they danced to the theme of Rocky.

To be honest, the paso doble was a much better dance for Chaz because it’s more about being in control then it is about speed — and he fared much better than in the past. He got his highest score yet — and Cher was there to cheer him on!

J.R. and Karina (26/30): J.R. Martinez and Karina Smirnoff continued to wow us this week with their fox trot to the Pink Panther theme. The judges were split as Carrie Ann didn’t love it, but Len thought he was the best male dancer of the night

We thought it was the perfect blend of technique, performance and fun. J.R. in a pink suit and fake mustache was a great way to show his fun side.

What did you think of this week’s Dancing with the Stars?