Angelina Jolie and Brad Pitt are making both hit movies and a difference in the world. Find out where they’re focusing their humanitarian efforts now.

Angelina Jolie and Brad Pitt don’t just talk the charity talk — they walk the walk, too. Jolie and Pitt just donated $342,000 to the Humanitarian Initiative Just Relief Aid, a non-profit dedicated to providing healthcare to women and children in famine-plagued Somalia. 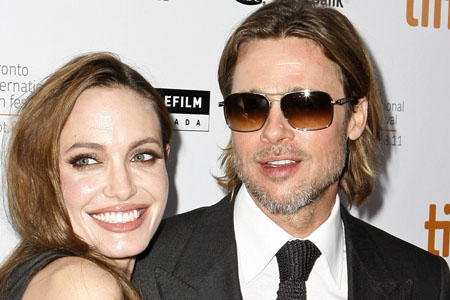 HIJRK director Mohamed Dahir told CBS News that the money will help the organization ramp up their aid to the 300 women and children who descend on Mogadishu’s Badbaado camp each day.

Somalia — and the entire Horn of Africa — is battling a severe famine that has killed an estimated 29,000 children so far and threatens to kill at least 750K more in the coming months. Civil war and other strife has kept much-needed aid from reaching the people who need it most.

Jolie and Pitt are no strangers to spreading the word about the African people’s plight. They’ve donated millions over the years to various organizations and spend time on the continent visiting with people and political leaders.

In addition, Jolie has been a goodwill ambassador for the U.N. High Commission for Refugees for the past 10 years. She’s now transitioning into a role as a Special Representative to work with Afghanistan, Pakistan and Iranian governments on the plight of refugees.

“It’s everybody’s problem,” Jolie told NBC’s Ann Curry in 2007 about the problems that plague Africa. “It is not America’s problem. I’m not somebody to say, ‘Well, America’s the wealthiest and a powerful nation and, therefore, has a responsibility to.’ I don’t think that’s true. I don’t think that’s the reason why. I think that shouldn’t be our motivating, ‘You should because you have.'”

Read on for more Angelina Jolie and Brad Pitt