Christina Aguilera ran up a huge bar tab after her performance at the Michael Jackson tribute concert.

Related story A Disney Sing-Along Special Is Coming, & It's Everything We Didn't Know We Needed 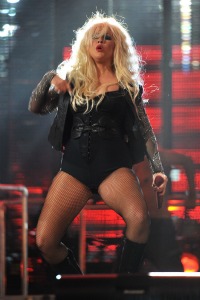 Either Christina Aguilera felt really good about her performance at the Michael Jackson tribute concert or she needed to drown her troubles in booze, because the singer reportedly ran up an $8,000 bar tab afterwards.

The Not Myself Tonight singer drew jeers for her appearance at the concert, stuffing her generous frame into a skimpy bodysuit and sporting hair that looked wildly unkempt.

After the show, Aguilera treated her entourage to dinner and drinks at the St. David’s Hotel in Cardiff, Wales — to the tune of $8,000, according to the Sun UK.

Of course, Aguilera and her crew had to get there in the first place — so she rented an entire train carriage to take the trip from London.

“Christina just sat back and enjoyed the views,” a source told The Daily Mail. “She had been told the countryside is beautiful and she just wanted to see it.”

“Her management hired half the carriage through a company called Train Chartering because she didn’t like the idea of a fleet of Bentleys sitting on the M4 for hours on end.”

During the trip, the group enjoyed chilled champagne, Belvedere vodka, Pinot Grigio, Fuji apples, a pot of honey, unsalted almonds and mineral water flown in from the South Pacific — all provided at Aguilera’s request and expense.

Before boarding the train, Aguilera and company enjoyed relaxing in a special VIP lounge normally reserved for royalty.

You can catch Christina Aguilera when The Voice returns for a new season on February 5, 2012.