SheKnows has the scoop from Jillian Michaels, Lucy Hale, Bridget Marquardt, Melissa Rycroft and more on what costumes they’ll be sporting this Halloween.

Who knows costumes better than actors? We caught up with a bunch of them at the Los Angeles Haunted Hayride where they told SheKnows what they’ll be wearing this Halloween.

“I’m going to be a vampire,” said The Biggest Loser trainer Jillian Michaels. “I’m so into True Blood.”

Halloween queen Bridget Marquardt told us that now that she has her own line of costumes, she’ll be sporting more than one this year.

“I launched a line of Halloween costumes this year and I have 17 sexy girl costumes that I designed,” said Bridget. “I love the pirate. And then we have the peacock, which is a best seller. I did a sexy Hef costume. And then there are some really cozy fun ones like a bunny, and devil and kitty.” 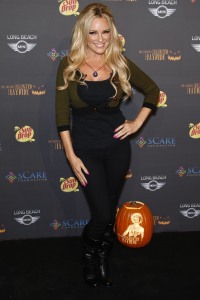 And Bridget said she’s not the only one in her family going all out for the big night.

“We have dinosaur costumes for all three of our pets so we’ll be doing a quick picture for Twitter,” she told us.

In the group costume category, Pretty Little Liars star Lucy Hale told us she and her friends are bringing back some favorite pop princesses.

“Four of my girlfriends and I are all going to be the Spice Girls,” said Lucy. “I wanted to be Scary Spice but all my friends are blond so I have to be Posh.”

And for full family fun, One Tree Hill‘s Barbara Alyn Woods told us her troop is dressing as characters from Alice and Wonderland.

See what the stars said scares them the most >>

“It’s a big holiday in our family,” said the mother of three. “We make sloppy joes and hot apple cider. We go trick-or-treating. We all dress up as a family, every year it’s a family theme.”

As for the men, Brothers and Sisters star Gilles Marini is taking a cue from the ladies this year and using Halloween as an opportunity to dress sexy.

“I think I’m going to be a sailor,” the actor told SheKnows. When asked what kind of sailor, Gilles responded, “The one that gets kissed.”

We don’t think he’ll have trouble fulfilling that wish!