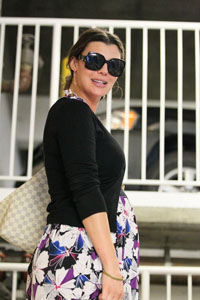 Congratulations are in order for model and actress Ali Landry — she just gave birth to her second child!

Landry admitted to SheKnows that this pregnancy was more difficult than her first.

Why? Landry is convinced it’s because of her diet. “All I would eat is carbs,” Landry told SheKnows of her first pregnancy. “I was having a sandwich everyday and eating rice.”

“Now I’m back to my normal eating habits and it’s starting to come off,” said Landry.

How did she keep active this time?

“I train with Selma Blair three to four times a week, and we do a pregnancy workout that we love,” Landry said.

The former Doritos girl also admitted that she wanted a girl.

“It would be easy with a girl so I could give her Estela’s hand-me-downs,” said Landry. Looks like someone gets to go shopping!

Congratulations to Ali Landry and her family!