Kirsten Dunst just revealed that she made her German citizenship official. Is she abandoning the United States for good? 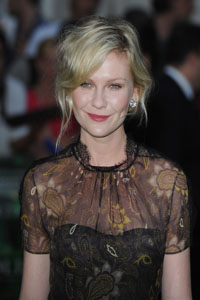 Break out the lederhosen: Kirsten Dunst is officially a German citizen! The American actress just gained dual citizen status in the European country.

“I’m now a real international lady,” the blond actress told the German tabloid B.Z. “One who can film in Europe without a problem.”

Dunst’s father has German ancestry, while her mother is Swedish. Despite her heritage, Dunst admitted that she knows German “at a child’s level.”

Still, that hasn’t kept her from dreaming of a life in Germany.

“It would be the greatest joy for me to act in a German film,” she told the magazine. “I would prefer to buy an apartment in Berlin. It’s such a young city, and right now so much is happening in Berlin.”

She’s doing her best to make her dreams come true – her most recent film, Melancholia, was directed by controversial Danish director Lars von Trier and co-starred Sweden native Alexander Skarsgard. Next up is the comedy Bachelorette.

Dunst prides herself on her ability to take on both dual citizenship and different movie genres. It’s that chameleon capability that has helped her transition a career from child star to serious adult actress.

“I’ve always done a mixture, like I did The Virgin Suicides, but then I did Bring It On. To me, I’ve always mixed it up, so this is just an opportunity because of my age, too, and there aren’t that many roles like this that are so unconventional for women,” Dunst told The Film Stage.

Read on for more Kirsten Dunst