Nikki Reed, Lauren Conrad, and Lucy Hale were among Hollywood’s bravest celebs who hit up the Los Angeles Haunted Hayride Sunday night. SheKnows was on-site to find out what makes celebs squirm.

The hills were alive with the sound of shrieking Sunday night as celebs came out to test their fear factor at the Los Angeles Annual Haunted Hayride in Griffith Park. Though we couldn’t film them getting spooked, they did fill us in what makes them scream.

But Lucy is no coward. She says she faces her fears head on.

“I love it,” she told SheKnows when we asked if she likes scary stuff. “I live for it.”

Another big fan of the spooky holiday is former Girls Next Door star Bridget Marquardt. She told SheKnows that freaking her out is no easy task. 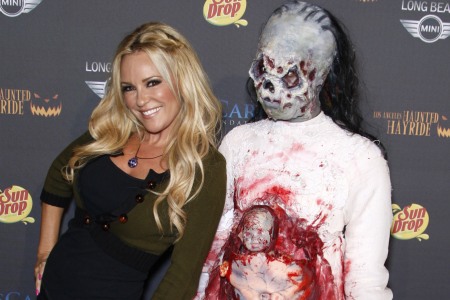 “It’s really hard to scare me but when they do, I know they did a really good job,” said Bridget. “The scariest thing is definitely clowns to me and aliens are a close second.”

But the ladies weren’t the only ones expressing their fears — Good Morning America host Melissa Rycroft told us her hubby Tye Strickland is actually the scaredy cat in the family.

“I love getting scared and I’m a hard scare,” she told SheKnows. “He’s actually a bigger wuss than I am. I think I’m going to have to be the man of the relationship and protect him.”

Read more: What they said about their Halloween costumes >>

Even hunky men like Sex and the City star Gilles Marini admit to catching the creeps at times.