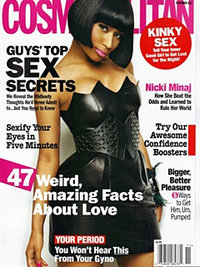 Nicki Manaj is the biggest female rapper around, so who can blame her for dreaming big? It’s a baby and an Oscar for her, Minaj tells Cosmopolitan in the November issue.

“I will have put out five albums and will have an Oscar and Grammys,” cover gal Minaj says to Cosmo. “And I will be getting married and, a couple of years after that, will have a bun in the oven. My whole life is about being Nicki Minaj now. It’s a never-ending saga.”

A saga that’s considerably happier these days as compared to Minaj’s early days in the music industry.

“I kept having doors slammed in my face,” Minaj says. “I felt like nothing was working. I had moved out on my own, and here I was thinking I’d have to go home.”

Minaj eventually found stardom after signing up with the Young Money crew and releasing her 2010 breakthough, “Pink Friday.” But before then, things were so bad that thoughts of suicide entered Minaj’s head.

“It was just one dead end after another,” Minaj says. “At one point, I was, like, ‘What would happen if I just didn’t wake up?’ That’s how I felt. Like, ‘Maybe I should just take my life?'”

We’re glad she didn’t. Hip-hop is considerably more entertaining thanks to Minaj’s presence. On the Cosmo cover, Minaj wears an appropriately Halloween-themed black, mini pleather dress and her hair is done in a Louise Brooks bob.

READ ON FOR MORE NICKI MINAJ

Nicki Minaj lands on the moon

Nicki Minaj has a nip slip on live TV