Former Weezer bassist Mikey Welsh died from a drug overdose on Saturday – and some messages he posted just weeks before his death raise some disturbing questions.

Former Weezer bass player Mikey Welsh was found dead from an apparent drug overdose on Saturday, after he didn’t check out of his room at the Raffaello Hotel in Chicago. Friends and fans were shocked to hear the news of the death of the 40 year-old, however Welsh posted some strange tweets just weeks prior that seemed to predict his death. 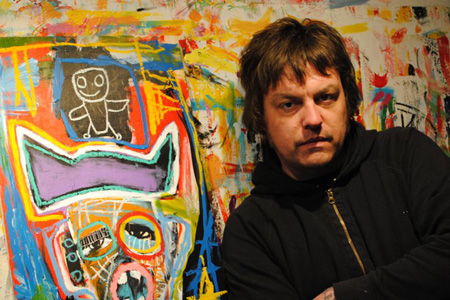 “Dreamt i died in chicago next weekend (heart attack in my sleep),” he tweeted on September 26. “I need to write my will today.”

He followed up with writing, “Correction – the weekend after next.”

He also posted a photo he painted on his Facebook page on that same day in September with the caption: “$250 if i am still alive at time of purchase, price to increase exponentially if i expire prematurely.”

Welsh was found in his hotel room by the hotel staff with prescription drugs and what was thought to be a bag of heroin, reports the Chicago Tribune.

Whether his death will be called an accidental overdose or suicide remains to be seen.

Welsh played the bass guitar for Weezer from 1998-2001, before leaving the band to become a painter.

“We are shocked and deeply saddened to hear the awful news, our friend and fellow weez rocker @mikeywelsh71 has passed away. We love u Mikey,” the band wrote on Twitter, following news of his death.