Arnold Schwarzenegger took the honors of unveiling a bronze statue of himself in Austria on Friday. The statue, which depicts the former governor as a young bodybuilder is the first of many self-commissioned works. 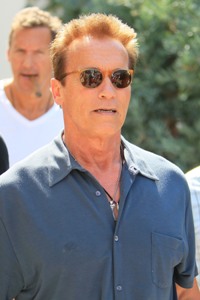 The Arnold Schwarzenegger museum is more than just a tribute to the man born in Austria who became a bodybuilder, movie star and governor. The 64-year-old honoree explains, “For me, this is not only a museum, it is also a symbol of will … everyone has a chance.”

With son Patrick by his side, Arnold Schwarzenegger inaugurated the museum created in his honor and pulled the cord to unveil an 8-foot bronze statue of himself as Mr. Universe — much to the delight of the crowd gathered in his native Austria.

During the visit Schwarzenegger was reunited with a teacher from his childhood. On his official Twitter page he shared the photo seen below, writing, “This was my teacher. She said she lived this long to make sure we made something of ourselves.”

The trip to Austria allowed Arnold Schwarzenegger time to visit with old friends during a dinner in Graz. “Love coming back home,” he tweeted along with a picture of the dining group, noting to a curious fan that he ordered, “Schnitzel, what else?”

Fox News reports the museum avoids reference to Schwarzenegger’s out-of-wedlock child and his pending divorce, with displays that end at his terms as California governor. Items inside the museum include Schwarzenegger’s first barbell, photos of him as a young child with his parents and siblings, the metal bed that he slept on as a youth, life-size Terminator models and the desk he sat behind while serving as California’s governor. 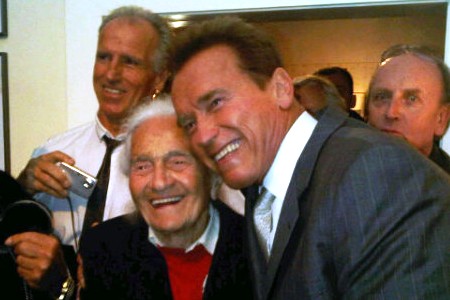 Would you be interested in visiting the Arnold Schwarzenegger museum?