Kanye West took some time out of his busy fashion and music schedule to protest corporate greed with Occupy Wall Street protestors.

Kanye West is a lot of things: musician, fashion designer, outspoken — and a protestor? That’s right, the notorious rapper made his way down to the Occupy Wall Street protests in New York City’s Zuccotti Park Monday afternoon to protest along with thousands of celebrities and fed-up citizens. 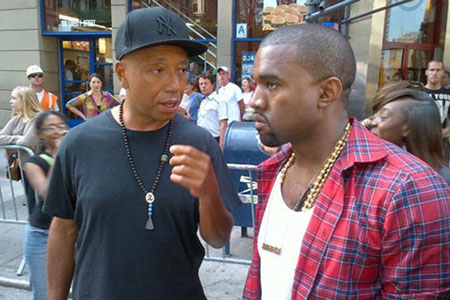 West — instantly recognizable in a gold chain, white tank and red flannel shirt — joined hip hop mogul Russell Simmons and the Rev. Al Sharpton at the protests, aimed at protesting the greed of Wall Street and high unemployment rates in the United States.

“I just walked @kanyewest thru the #occupywallstreet. I love how sweet and tolerant he was to the crowd,” Simmons tweeted afterward.

Simmons has been active in the protests during the past three weeks. The hip hop pioneer said that he’s willing to pay more taxes — he’s in the top one percent of Americans considered wealthy.

“I’m happy to pay a little more taxes if it means better education for our children,” he said. “I don’t pay enough taxes and I know it,” he told Sharpton on his radio show. However, he doesn’t want to be the only one.

“I want to write a check when everybody else does,” Simmons said. He also has nothing but praise for the protestors.

“People are here with an honest heart and honest intentions,” Simmons said. “These young people are our future leaders.”

No word on West’s thoughts about today’s Occupy Wall Street walk-through — he seems to have abandoned his Twitter account. Too bad, we really need more Kanye West tweets in our lives.

Do you think celebrities help — or hurt — the Occupy Wall Street movement?