Kim Kardashian and Kris Humphries are thinking about their future kiddos, but it won’t happen right away. 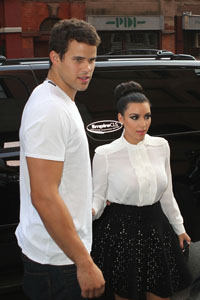 Tonight is the night we’ll finally get to see Kim Kardashian’s fairytale wedding to Kris Humphries. We’ve already watched a bunch of drama go down, so it will be fun to see the Kardashian Klan come together for the wedding.

Kardashian and Humphries are still newlyweds, but everyone wants to know when Kardashian will get pregnant. Who wants her to start having children? Her mother, Kris Jenner.

“She wants babies. Let’s cross the fingers. And her mom wants her to have babies quick!” socialite Lisa Gastineau told US Weekly after the Aug. 20 wedding. Kardashian revealed earlier this summer that she wanted to be pregnant by the end of the year.

Now, the notoriously busy Kardashian is backtracking on those comments, saying she wants to wait a while longer.

“I think I’m going to wait a little bit,” she said.

“We’re definitely going to wait at least a year, just because we don’t even know where he’s going to be playing, so we have no idea where we’re living. I think we have to figure that out first before we have babies,” she told Matt Lauer on The Today Show, referring to the current NBA lockout. Humphries played for the New Jersey Nets last season.

“I would go to Oklahoma City,” Kardashian said when asked if she’d move somewhere less-than-glamorous. “We’re not going to live a separate life.”

It sounds like she’s still busy training her new husband. His messy tendencies are not popular with the organized Kardashian.

What pet peeve does she want her husband to stop doing?

“Probably for Kris to pick up his clothes off the floor,” Kardashian said.

Do you think Kim Kardashian and Kris Humphries will be good parents?