Lindsay Lohan is back in the news again, with a limo company alleging she owes them for giving her clan rides and protection back in 2009. Too bad her Gotti movie was just put on hold again.

How does Lindsay Lohan top a showdown with her married lover’s wife, a tweet propositioning Chris Brown, a few Fashion Week scenes and a video of her buying what looked like drugs? An almost $100,000 lawsuit ought to cover it, but Lohan didn’t stop there: Word is she just threw down $80,000 on a new Porsche. 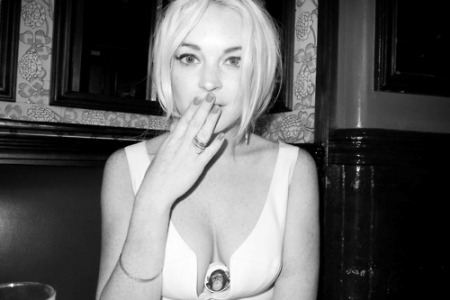 Lohan just can’t seem to escape legal drama. Elite Transportation Limo and Security Services is suing her and Tri-Star Entertainment for unpaid rides and security for the Lohan clan, according to TMZ. Elite claims Lohan hitched several rides with them in 2009, sometimes with hired security to boot, for as much as $6,000 a pop, and then left behind a $33,000 unpaid bill. Tack on late charges and fees and Elite says she owes $90,585.79.

“Lindsay has not been served with any lawsuit, and we cannot comment on a lawsuit we have not yet seen,” her rep says and Lohan hasn’t taken to Twitter to respond, but several sites have confirmed the suit.

Elite alleges that Lohan racked up her bill from February to May 2009, a time that falls right in the middle of her transition from super starlet to courthouse regular. Not only was Lohan making news over her breakup dramatics with then-girlfriend Samantha Ronson, but that March was the month Lohan’s 2007 DUI conviction first resurfaced with an arrest warrant. She was also accused of her first jewel heist a month after she stopped using Elite.

After years of drama, Lohan has finally seen some positive action of late. With her first shoot as Phillip Plein’s new spokesmodel in the can, she even celebrated by buying herself a new Porsche Panamera, worth $80,000, according to RadarOnline.

Of course, it can never stay positive for Lohan for too long: Today news dropped that her Gotti movie is on hold again. Maybe the limo company will accept a trade…