Zsa Zsa Gabor just finished undergoing surgery to replace a feeding tube in her stomach that had caused a serious infection. Find out the status of her health and if she will be going home soon. 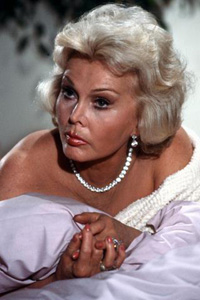 Zsa Zsa Gabor was rushed to UCLA Ronald Reagan Medical Center on Saturday due to an infection that was caused by a loose feeding tube, her spokesman says. She had a very high fever as well as internal bleeding and had lost consciousness while at her home in Bel Air.

In fact, Gabor is scheduled to return to her Los Angeles home by Monday or Tuesday at the latest, Blanchette says.

Gabor has had health issues for quite a while and has been unable to walk since a car accident in 2002. She suffered a stroke in 2005 and this past year she had her leg amputated and had a hip replacement. The actress even received last rites from a priest in August.

She returns home to her ninth husband, Prince Frederic von Anhalt. “She’s recovering nicely,” he tells the LA Times. “She’s a big fighter… I always feel optimistic, because I know her.”