Teresa Giudice is doing her best to make enemies of all her Real Housewives of New Jersey co-stars. What kind of trouble is she stirring up now?

Real Housewives of New Jersey star Teresa Giudice isn’t doing a lot to make — or keep — her friends on the show. First, the Italian Giudice got into it with co-star Jacqueline Laurita for spreading rumors about sister-in-law Melissa Gorga. 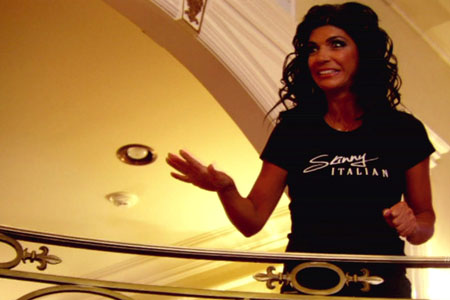 Now? She’s talking a lot of smack about another co-star, Caroline Manzo. Giudice’s new cookbook, Fabulicious!, caused a lot of drama on RHONJ on Sunday night. In the book, Giudice apparently writes that Manzo “is as Italian as the Olive Garden.” However, Giudice also says she’s a “huge fan of Caroline Manzo, even if she is only one-sixteenth Italian, or whatever she is.”

However, the scandal-prone Housewives star said she was joking about Manzo. “My cookbooks are not ‘bashing books,'” Giudice wrote on her website. “They’re fun and funny and unique…like me.”

We’ve reached out to both Manzo and Giudice’s reps to get more of the story.

“If I meant any harm, I wouldn’t have put a big, beautiful picture of her in there,” she adds. “You don’t see any of Danielle Staub or Kim G. in there, do you?”

“Heck, I’ll throw in an apology to Danielle right now for naming a Puttanesca sauce in Skinny Italian after her,” Giudice added. “I’m sorry though, I can’t apologize to Kim G. for anything because it’s against my religion to worship the devil.”

Plus, she thinks Manzo is just jealous of her success.

“I remember when I was writing my very first book proposal, Caroline was also trying to sell her own cookbook. Caroline told me I was doing it wrong, that I wasn’t smart enough, that I didn’t have the right agent, the right co-writer, the right anything,” Giudice said.

“I took her criticism like I always do, with a smile, and did what I wanted to anyway. And my book got picked up. Caroline’s didn’t. Not one publisher wanted it. I don’t know why. I wish everyone success in all they do, but I can’t help it hers didn’t get published.”

Do you think Teresa Giudice is being sincere or is she being a passive-aggressive backstabber?

Read on for more Real Housewives of New Jersey