Tiger Woods was on the receiving end of a food fight this weekend in California. How did he react? 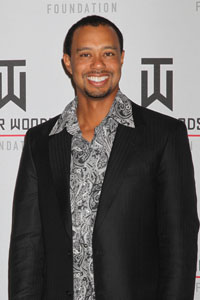 We’ve heard of pie attacks and glitter bombing — but a hot dog as a weapon? That’s a new one. It happened to Tiger Woods this weekend while competing in the Frys.com Open in San Martin, California.

A man came out of the crowd during the 16th hole and threw the meat toward Woods. The scandal-plagued golfer stopped his shot and waited while the hot-dogger was detained by authorities.

No immediate reason was given for the food fight, though authorities said he was drunk. Perhaps it was a comment on Woods’ multiple affairs? We’ll probably never know.

“When I looked up, the hot dog was already in the air,” Woods said afterward. “He was pretty far away from me.”

The tournament marked Woods’ return to the course after taking time off from the PGA tour in August to deal with lingering injuries.

“Some guy just came running on the green, and he had a hot dog, and evidently … I don’t know how he tried to throw it, but I was kind of focusing on my putt when he started yelling,” said an unfazed Woods. “Next thing I know, he laid on the ground, and looked like he wanted to be arrested because he … put his hands behind his back and turned his head.”

Woods’ new, laid-back attitude is a change from the tumultuous two years he’s had since Rachel Uchitel — and many more women — came forward about their affairs with the champion golfer.

Perhaps it has something to do with Uchitel’s recent marriage. The club promoter just married California businessman Matt Hahn in Las Vegas.