David Boreanaz says his affair with Rachel Uchitel made his marriage stronger. 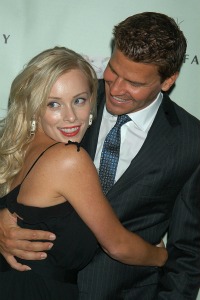 When the Tiger Woods scandal broke, the world was introduced to Rachel Uchitel, mistress to the stars. Of the many names that popped up as having enjoyed her wide array of talents, David Boreanaz was just one — but one of the most explosive.

Now that Bones actor is telling TV Week that the fling was a major bonding experience in his marriage to Jaime Bergman. Say what?

Cheating with Rachel Uchitel was “a bonding experience, in the long run,” said Boreanaz.

Saying his marriage has had “fantastic moments” and “extremely rocky moments” Boreanaz says when he met Uchitel, it was one of those rocky moments.

“In a sacred ground like marriage, you find yourself out of it at certain times for reasons unknown that can be destructive,” he told the mag. “There could be a demon that kind of comes out and overtakes you.”

While his wife is remaining mum, he says he for one is not ready to throw in the towel. “Do I believe in giving up? No, I don’t,” Boreanaz said. “I’m a fighter. I’m a lover.”

David Boreanaz and Jaime Bergman married in 2001 after dating for less than a year and have two kids, nine-year-old Jaden and two-year-old Bella.

read on for more rachel uchitel

Rachel Uchitel: A woman sounds off