Michelle Williams talks about playing Marilyn Monroe in My Week with Marilyn. 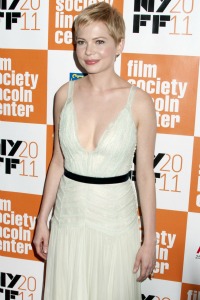 Michelle Williams is getting rave reviews for her turn as the iconic blond bombshell in My Week with Marilyn, but the actress says playing sex symbol Marilyn Monroe was a lot more than just pouting and putting on a baby voice.

In a press conference following a screening of the movie at the New York Film Festival, Williams says she decided to take on the project because the role called for a real characterization, not the usual Monroe impressions we’ve seen on screen in the past.

“Because the previous representations of her were more of that ilk, it felt like that was kind of the first thing that made me think, ‘Well, maybe I can explore this,'” Williams said. “It was a decision made kind of in the safety of my own home; I didn’t really consider the larger implications of it. And it was a very, very slow process. It all started at home. It all started with watching movies, listening to interviews, poring over books. It was just something that I put on in my living room — mimic a walk, or figure out how exactly it is she’s holding her mouth.”

What career does Michelle Williams dream of? >>>

“The first sort of big discovery that I stumbled on was that [for] Marilyn Monroe herself, ‘Marilyn Monroe’ was a character that she played,” Williams continued. “The image that you’re most familiar with? There’s a person underneath there. That was the first big discovery: That it was carefully honed, but it was artifice. It was honed to where you couldn’t tell that it was artifice. It felt so real, but it was something that she’d studied and perfected and crafted. So once I discovered that that was a layer, I was finding out what that layer was and getting underneath it. It was a long and ungainly process.”

That process paid off. Michelle Williams is getting rave reviews for the role.