Julianne Hough is returning to the Dancing with the Stars ballroom — but not to compete. The dancer — turned singer — turned actress — is returning Tuesday to promote her new film, Footloose. 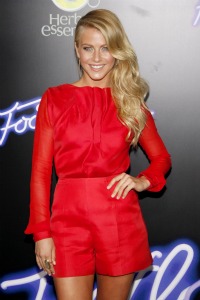 Julianne Hough is breaking out her dancing shoes for a one-time Dancing with the Stars appearance that is sure to have everyone running to theaters Friday (Oct. 14) to see Footloose.

The next eliminated star isn’t the only thing people will be chatting about after Tuesday’s (Oct. 11) Dancing with the Stars results show.

Julianne Hough will be hitting the floor with her Footloose co-star, Kenny Wormald, right beside her. The duo will give fans a taste of their moves, just days before their movie drops.

Kristin Cavallari leaves the DWTS ballroom — why so soon?

Julianne Hough said in an interview with USA Today, “I’ll be dancing with Kenny. We will definitely be dancing to Footloose, but we will have a few tricks up our sleeves in the beginning.”

Could one of those tricks be a duet of Holding Out For A Hero? We think so.

Julianne Hough will also take on the floor with one of this season’s favorites, and someone close to her heart — brother, Derek Hough. The jive is said to be on their radar.

Hough has won Dancing with the Stars twice in the past, but she’s been frying bigger fish since walking away from the mirrorball glory.

Aside from Footloose, Hough’s also starring in Rock of Ages as Sherrie Christian and everyone knows who’s in the movie with her — Tom Cruise, Marie J. Blige and Russell Brand, just to name a few big names.

You don’t want to miss Julianne Hough shaking her tail feather on Dancing with the Stars all in the name of movie promotion. Besides, it will be nice to have her back — even if it is just for a night.

Are you going to be cutting loose with Footloose on Friday when her movie hits theaters?