According to the U.K.’s Daily Mail, Demi Moore has sought a divorce attorney to end her marriage. The story states that Moore has looked into a legal consultation to find out her options. 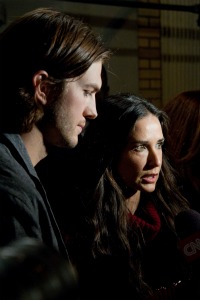 After a last-ditch bid with counseling failed, actress Demi Moore has reportedly consulted a divorce lawyer to weigh her options according to a story in the U.K.’s Daily Mail.

The 48-year-old actress and Kutcher, 33, just celebrated their sixth wedding anniversary this September.

Reports of their marriage being in trouble began after photos of Kutcher partying with 23 year-old Sara Leal surfaced on the internet.

The two then took to the Twitterverse to air their dirty laundry, with Moore writing quote after quote regarding relationships. Kutcher stayed mum until he tweeted the title to a Public Enemy song, Don’t Believe the Hype. They were later spotted at Kabbalah services together.

An entertainment industry insider revealed to the Daily Mail, “Miss Moore has been totally humiliated. On Friday, therefore, she consulted a lawyer about getting a divorce.”

The insider continued, “The discussion included her living arrangements and how a divorce would impact her assets. She is worth about $150M dollars. This is a huge and very tough decision for Ms. Moore to take. But her trust has been shattered.”

“She desperately wanted to save their marriage, but the Sara Leal story was a hard one for Kutcher to deny because it was backed up by the seedy photos of him partying.”

According to the story, the couple has tried Kabbalah marriage counseling sessions to no avail. They are continuing to work through their problems together.

This is Kutcher’s first marriage. Moore has been married twice, to singer Freddy Moore and to actor Bruce Willis, with whom she has three daughters, Rumer, Tallulah and Scout.

When asked for comment, Moore’s publicist and lawyer had none.