Former Weezer bassist Mikey Welsh was found dead at the Raffaello Hotel in Chicago on Saturday. The cause of death is not immediately known.

Related story Did Weezer bassist predict his own death?

Former Weezer bassist Mikey Welsh died unexpectedly at the age of 40 on Saturday. His body was found at the Raffaello Hotel at 1:45 p.m. 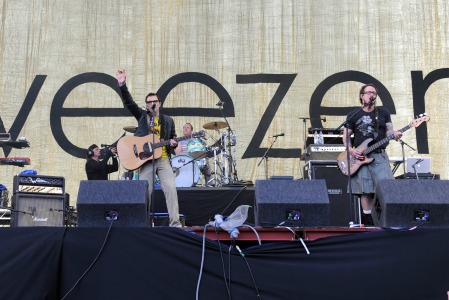 A spokesperson for the Chicago police department, Darryl Baety, said that officers responded at 1:45 p.m. Saturday regarding a guest who had been scheduled to check out, but did not.

First responders knocked on the door, and hotel personnel entered and found Welsh “unresponsive and not breathing”.

Welsh was pronounced dead at the scene at 2:50 p.m. The cause of death is pending toxicology reports.

Welsh performed with Weezer from 1998 to 2001. He left the band after suffering a nervous breakdown. After leaving the band, he began a career as a painter.

Said Welsh in a 2002 interview, “I’m taking a break from music. I really feel the need to reinvent myself and move on. I couldn’t be happier painting. Music is still an important part of my life, but I really have no desire to actually play it.”

The band’s official page stated, “As many of you may have heard, Mikey Welsh has passed away. The news was announced via his official Facebook page earlier in the evening. Understanding that many here are grieving, Weezerpedia has created a digital eulogy page for Mikey Welsh where fans can post stories, pictures or thoughts. R.I.P Mikey.”