Michael Jackson’s three children attended the Michael Jackson tribute show in Wales, titled Michael Forever, despite the family’s feelings that the timing was too close to the Jackson manslaughter trial. 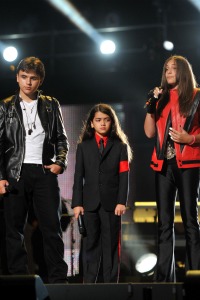 Even with all the controversy surrounding the Michael Jackson Michael Forever tribute show, sluggish ticket sales, the ongoing manslaughter trial and problems with the Jackson family regarding attendance, the show went on this past Saturday.

At the beginning of the four-hour tribute bonanza, Michael’s three children —  Prince Michael, Paris and Blanket Jackson — appeared onstage and spoke to the crowd of 50,000 fans.

Said 13 year-old Paris, “We’re very happy to be here on this special night to honor our father.”

The children wore outfits to memorialize their father’s iconic moments in video history. Paris wore a Thriller-style jacket, Prince Michael evoked an image from the Bad video and Blanket was in a You Rock my World ensemble.

Three of Michael’s brothers (Marlon, Tito and Jackie), sister LaToya and Jackson matriarch Katherine also attended the show. The three brothers performed Blame it on the Boogie and asked the crowd the question, “Can you feel his spirit in the house tonight?”

Motown legend Smokey Robinson sang She’s Out of My Life, Beyonce sang I Wanna be Where You Are, Jamie Foxx performed Rock With You and Christina Aguliera sang Charlie Chaplin’s Smile, one of Jackson’s favorite songs.

Brothers Jermaine, Randy and sister Janet stayed away, stating it was wrong to hold the show at the same time as the trial.

Said Marlon regarding their decision, “Each one of us grieves differently. We want to celebrate the positive side of his life, the positive things he did.”

R&B star Nee Yo sang Billie Jean and the show finale was most of the performers, including Michael’s children, onstage for a rousing rendition of Don’t Stop ‘Till You Get Enough.