The hottest cats in entertainment walked the red carpet at the Los Angeles premiere of Puss in Boots. 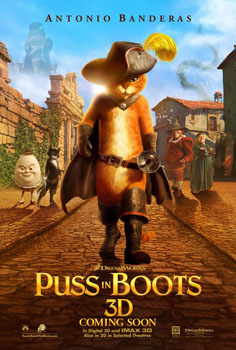 We fell in love with Puss in Boots when he first showed up on our screens in Shrek 2 — something about those big eyes and Spanish accent won us over. That’s why we were thrilled when Antonio Banderas — the voice of Puss in Boots — revealed that he would reprise the role that made the kitty cat famous.

Puss in Boots follows the swashbuckling cat and his main meow, Kitty, before they meet Shrek and Princess Fiona. The animated film “tells the hilarious and courageous (daring, bold, brave) tale of Puss’s early adventures as he teams with mastermind Humpty Dumpty (Zach Galifianakis) and the street-savvy Kitty (Salma Hayek) to steal the famed Goose that lays the Golden Eggs,” according to the official synopsis.

Cats everywhere are giving Puss in Boots the coveted “four paws up” after seeing the movie at the special cats-only premiere this week in Los Angeles.

Banderas and cat friends take in Puss in Boots

Adorable! We’re pretty pumped for this film — it looks like something both kids and adults will appreciate. Plus, you can’t go wrong with 3D.

“Puss in Boots is a great crowd pleaser that goes to make the family laugh. It is extraordinary to work in America, a country that I went to without knowing the language, and they are using my voice! It’s incredible!” Banderas recently told Movies.ie about his new film.

Will you check out Antonio Banderas and Salma Hayek when Puss in Boots hits theatres on Oct. 28? We’ll definitely be there.

Read on for more Puss in Boots